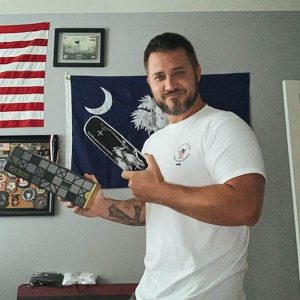 Justin Harms was born and raised in upstate South Carolina. He married “the coolest woman ever” and they have “the best son any parents could ask for.” Justin and his family spends much of their free time going to and from football practice, games, and agility training for his son.

After graduating from high school, Justin joined the Navy and served as an Aviation Electronics Tech/Naval Air Crewman. He then joined the SC Army National Guard and was deployed to Iraq in 2008-2009 as a Blackhawk Crew Chief.

It was a big change jumping into the promo industry in 2002, but one where his background and sharpened skills from the Army and Navy have helped him be successful.

Pet Peeves: People that chew with their mouth open!

Favorite Quote: “It only takes one ‘OH CRAP!’ to take away a whole bunch of ‘Attaboys!'”

Childhood Hero: My Dad – Miss you every day!

What you want to be when you grow up: Ummmm, you mean I have to grow up?

Skill no one else knows about: If I say then everyone will know!!!