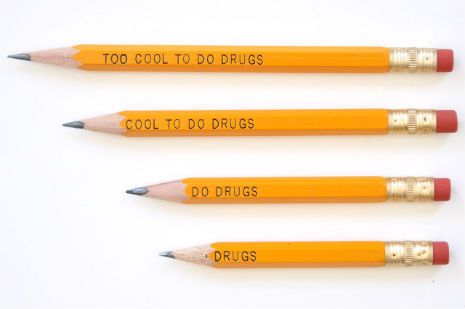 Remember the story about the school that ran an anti-drug campaign by printing and distributing “Too Cool to Do Drugs” pencils to students? When the pencils were sharpened, they read “Cool to Do Drugs” and eventually “Do Drugs”. Talk about a promotional product fail.

I empathize with that well-intended organization whose campaign completely backfired. Having been in the promotional products business for a couple decades now, I can say that we have had our share of fumbles too.

One of my favorite, humbling stories goes like this….
We have a client who is a national security and investigations firm. They were having an executive level, invitation-only golf tournament, where they hoped to generate stronger relationships with their clients. We were charged with coming up with a branded item for the guests that would be delivered at the 18th hole. The gift was to be under $3 and needed to tie into their messaging around “investigations”.

After a couple of rounds of kicking ideas that our client rejected, they suggested we produce submarine-shaped stress toys with their logo and tagline. Agreeing with them that it tied in well with the messaging, came in under budget and allowed us to meet the fast approaching deadline, we proceeded.

What happened? Executives decided to use the stress toy submarines in what I will sadly call “target practice”. With their golf clubs, execs teed the submarines up and tried to see who could smash the submarine shaped stress shapes into pieces. The bigger the explosion, the better. By the end of the event, the once perfectly manicured 18th hole green was full of grey stress-shaped submarine shrapnel. The event planner we worked with was mortified. Alternatively, her boss assumed the activity was teed up by design, and thought getting their clients to have fun together in this way at the end of the event was a brilliant move.

What did we learn?
1) Know your audience. Executives, who seem to have everything, certainly do not want a $3 foam toy that really does not relieve stress.
2) Be a challenger. We should have pushed back on our client’s suggestion. We knew it was not the best idea yet it was their money and we did not want to hurt feelings. We should have hurt feelings and delivered better suggestions.
3) Sell stuff that has form and function. Don’t sell stuff that will end up in the landfill. Ever.

Which would you rather receive?